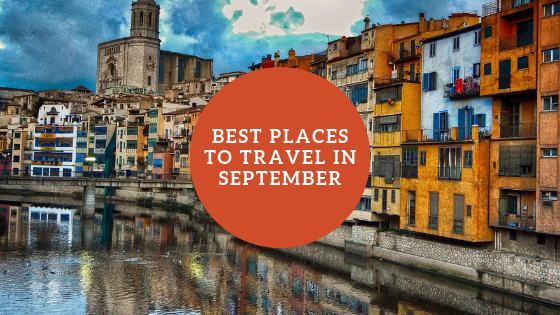 If you don’t mind taking the kids out of school, September is the ideal month to travel. The weather is still warm, crowds are thinned, and the shoulder season offers prices half what they were during August. And if you don’t have kids, well good news: You won’t have to deal with droves of kids in all the tourist spots. But when faced with this smorgasbord of travel options, sometimes it’s tough to pick which cheaper, less-crowded destination to visit. With a little help, you’ll find your own ideal place to travel this September. Here are 12 favorites for 2019.

The blistering, shut-down-the-airport heat of summer has begun to subside in Arizona, but the madness (and mad prices) of winter and spring have yet to arrive. In Scottsdale, you can get up and hike through the nation’s largest urban nature preserve at the McDowell Sonoran Preserve before returning to your hotel for a pleasant breakfast by the pool. You can also kayak among red rocks down the Salt River.

Because it’s still the offseason, you can get more than half-off rooms at many of the area’s fabled resorts. Go early in the month, and the ultra-posh Andaz Scottsdale has rooms for under $200 a night, a venerable steal for your own adobe bungalow. For a chiller, trendy apartment vibe, head to The Scott Resort and Spa, where you can ride out the heat of the day with a surprisingly affordable massage in the spa.

Early fall should bring pleasant temperatures during harvest season in this wine region about an hour from Barcelona. So you can enjoy that city without summer crowds for a couple days before heading up to the Priorat region and the town of Porrera. Stroll through the provincial streets stopping into tasting rooms before venturing out through rolling hills and visiting Poblet and Escaladei abbeys.

The Las Vegas of Asia is a fascinating place beyond its bright lights and lavish hotels, awash in Portuguese architecture and food leftover from the colonial period. Fall is a perfect time to visit this Chinese Autonomous Region, as you’ll get a taste of the region’s culture too during Art Macao, running through October. The festival brings special exhibitions to many of the city’s hotels, as well as public art installations, youth programs, and free musical performances. On Friday and Saturday nights, you can also witness the 30th anniversary of the Macao International Fireworks Display Contest.

To truly delve into the culture of Samoa, it is best to visit in September. Not just because the weather is pleasant but because that’s when the Teuila Festival takes over the capital city of Apai. Think of the festival as a crash course in Samoan culture, where you’ll witness traditional dancers, fire knife dancers, and a floral parade during the opening ceremonies. The weeklong fete continues with musical performances, traditional tattooing, more dancing, and wood carving and cocktail competitions. Or extend the trip through both Samoa and American Samoa for the Samoana Jazz & Arts Festival. So if you’ve ever wanted to visit the South Pacific for anything other than its beaches, this is the time to do it.

September’s best whale-watching destination is this small city down the Western Cape from Cape Town. September is smack in the middle of the southern right whales’ residency here, with over 100 known whales cruising the waters offshore. Most whale-watching trips will have you witnessing all kinds of whale behavior. From the 27th to 30th, you can go to the Hermanus Whale Festival, where in addition to the usual food, crafts, and live music performances you can also attend educational whale talks and catch the Whales on Wheels car show.

Any time that’s not winter is an ideal time to visit the Carousel Capital of the World, home to six of the 170 remaining hand-carved, antique wood merry-go-rounds in the world. But in early September, Binghamton gets even trippier when it hosts the LUMA Projection Arts Festival. For those two days, light projections take over the city, blasting light-based art over the city’s structures and turning the town into a giant, lit-up museum. Highlights this year include Onionlab’s Phasing Rain, a walkthrough exhibition that will examine the creative and destructive force of rain. And Maxin10sity’s Pandora’s Box, a trip through Greek mythology at Binghamton City Hall showing the bad that can come from good intentions.

There is, quite simply, no bigger barbecue party in the world than the one that descends on Kansas City in September. The American Royal World Series of Barbecue celebrates its 40th year from the 12th to the 15th, when over 600 teams converge on the Kansas Speedway to see who is the world’s greatest grillmaster. As any good western celebration does, the World Series also features a pro rodeo, a livestock show, and a good old-fashioned hoedown. For equine enthusiasts, the weekend also includes horse jumping and Arabian horse shows. And even clinics where you can learn how to judge next year.

So, maybe climbing Mount Everest, or even visiting base camp, doesn’t seem quite so appealing anymore. All the better reason to explore the vibrant capital city of Nepal instead! Here, beginning on the 13th you can immerse yourself in Nepalese culture during the Indra Jatra Festival. The party takes over Durbar Square for eight days, where nightly tributes to the god Indra include masked dances, cultural displays, and, of course, plenty of food.

Seriously, skip the Rainbow Mountain pictures in the Sacred Valley, as you’ll spend half your day waiting for one photo op. Instead, spend your time in the city of Cusco, where in early September you can take part in the Fiesta de la Virgen de Natividad. The people of Cusco mark this celebration by parading through the streets with a statue of the Virgin Mary, culminating in a massive party full of music, dancing, and traditional food. Cusco is also full of hotels that keep the colonial vibe going, whether it’s the JW Marriott Convento El Convento Cusco — an old convent with daily alpaca visits — or the Inkaterra La Casona, a 16th-century manor house that’s the city’s first boutique hotel.

Good times abound statewide in September when a handful of fall festivals and an unusual adult summer camp bring Connecticut to life. In New Haven, kick off the month by running in one of the biggest half=marathons in the world at the New Haven Road Race. Then immediately negate it during a night in one of America’s best Little Italys. Food also abounds at the Connecticut Folk Festival and Green Expo on the 7th, which you can turn around and burn off during the New Haven Grand Prix cycling race on the 13th.

Over in Kent, Camp John Waters runs from the 13th to the 16th, where the guy who made Hairspray and Pink Flamingos hosts a weekend-long “summer camp.” Events include Hairspray Karaoke, John Waters bedtime stories, costume contests, Bloody Mary bingo, and a full-on film marathon.

Italy during the summer can be an exercise in overtourism. And while the food is just as good and the scenery just as beautiful with crowds around, it’s still better experienced without them. Head to the boot in September and you’ll be able to move through the Cinque Terre without hundreds of school groups, marvel at the architecture of Rome without being asked to move for a picture, and enjoy thin crust pizza in peace.

If you can’t quite swing Italy this year but want all that same level of fresh, it-just-tastes-better-here food, head instead to Sacramento. The nation’s agricultural capital is within 300 miles of where a large amount of American produce is grown, a fact you’ll learn while eating your way through the annual Farm-to-Fork Festival from the 27th to the 29th. Enjoy perfect mid-80s daytime temps while perusing stalls from farmers, restaurants, and Northern California wineries in front of the capitol building. The whole thing culminates with the annual Tower Bridge Dinner, when chefs from the city create a multi-course feast on the city’s iconic bridge. Tickets are nearly impossible to come by, but it’s still a spectacle to behold.

The majestic Cape Breton Highlands National Park, one of the most scenic wilderness treks you can take in North America, can be a little overwhelming if you try and plan a trip yourself. The Cabot Trail alone is almost 200 miles long, and deciding which river canyon and rust-colored cliffs to go see can be challenging. But during September the park hosts its 15th-annual Hike the Highlands Festival, where it offers loads of guided hikes in and around the park. If you’re feeling sporty, you can also compete with other hikers to see who hikes the longest during the festival.